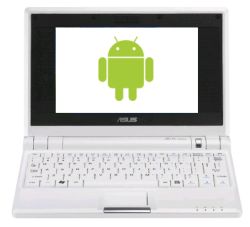 Asus is thinking of installing the Google Android operating system on future netbooks. Android was initially developed for cellphones like the T-Mobile G1. But we’ve already seen that it can be installed on mini-laptops like the Asus Eee PC 701 or Eee PC 1000H with a little elbow grease.

I’ve been a little skeptical that any major computer makers would actually release a netbook running the operating system when full fledged desktop operating systems like Windows, OS X, and Ubuntu Linux run just fine on the mini-laptops. But Bloomberg reports that Asus has assigned some engineers to the task of developing an Android powered netbook.

Android is built for devices with small, low resolution displays like cellphones, which could make the OS easy to use on netbooks which typically have 1024 x 600 pixel or lower resolution screens. But right now, there are far more applications available for a free and open source operating system like Ubuntu than there are for Android, so I can’t see many advantages to running Android. If you don’t think Ubuntu is user-friendly enough, you could always go with a customized Linux distribution like the HP Mini 1000 Mi Edition software or the custom version of Xandros that Asus is currently installing on Linux-based Eee PC models. Those operating systems are still capable of running thousands of open source applications including OpenOffice.org, Pidgin, and GIMP.