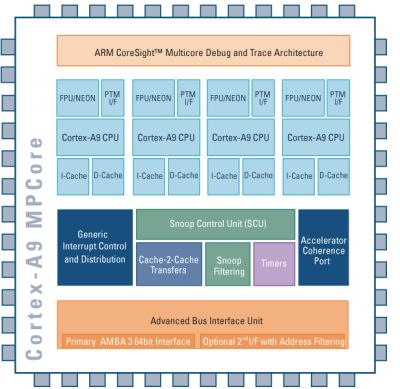 Chip maker ARM has a pretty strong track record making CPUs for cellphones and PDAs. And now the company is breaking into the netbook and low power computer market. We’ve already seen a handful of companies announce plans to develop netbooks around ARM-based chips like the Freescale i.Mx515 chip which is based on ARM Cortex A8 technology. But today at Mobile World Congress in Spain, ARM launched the new Sparrow processor which is built around the company’s Cortex A9 CPU architecture.

What sets Sparrow apart from existing chips like those used in smartphones like the Phone or the upcoming Palm Pre is that it supports multi-core configurations which provide enhanced performance while still consuming significantly less electricity than low power chips from competitors Intel and VIA.

Cortex-A9 can support up to 4 separate cores and should provide three times the processing power of the chip currently used in the iPhone. It should be plenty fast enough to run a full fledged Linux distribution like Ubuntu or a custom distro like Xandros. But since Windows and OS X aren’t designed to run on ARM processors, you won’t see any ARM powered netbooks running Windows 7 or OS X anytime soon.

It sounds like the ARM Sparrow chip won’t actually hit the market until 2010, so it could be a while before we see any dual or quad core netbooks with ARM processors.