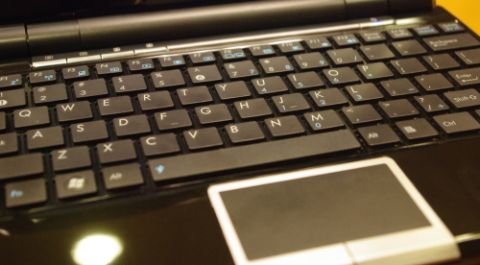 I got a chance to check out the new Asus Eee PC 1000HE a few weeks ago at CES. But eyeballing a machine on display at a trade show booth isn’t the same thing as testing one in your office – which is exactly what the lucky folks at Laptop Magazine are doing right now.

In a nutshell, this computer is a lot like the Asus Eee PC 1000H, except it has a new and improved keyboard, a slightly faster CPU, a new chipset, a higher capacity battery, and a lower price tag. It has the same chassis, touchpad, and display as earlier models, which means it’s a bit larger and weighs a bit more than comparable 10 inch mini-laptops.

Laptop Magazine reports that the keyboard feels a lot better. There’s no flex in the keyboard panel, and the keys have been repositioned so that the shift key on the right side is to the left of the up arrow. The new processor doesn’t seem to make a big difference in performance, but it doesn’t seem to hurt things either.

The netbook is available for preorder for Amazon for $374, but isn’t yet available to the public.