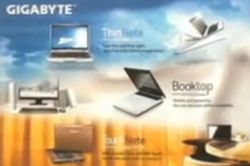 Gigabyte is releasing three new mini-laptops. Unlike the Gigabyte M912, which has an 8.9 inch touchscreen display, all of the new models have 10 inch screens, and only one has a touchscreen.

The Gigabyte ThinNote M1024 is a thin and light machine. The Booktop M1022 is described as being “as powerful as a desktop.” And the TouchNote M1028 looks like a larger version of the M912. It’s a convertible PC with a touchscreen display that can be used as a laptop or a tablet PC.

According to jkkmobile, the TouchNote M1028 convertibel tablet will have a 10 inch, 1024 x 600 pixel display, a 1.6GHz Intel Atom N270 CPU, 1GB of RAM, and a 160GB hard drive. It runs Windows XP Home and supports 802.11b/g/n WiFi, Bluetooth, and has an optional 3G modem. I haven’t seen any firm specs for the other models. Pricing and availability aren’t available yet, but it looks like Gigabyte will be showing these mini-laptops off at CeBIT in March, so I wouldn’t expect to see them on store shelves before then. And the Gigabyte M912 was never released in the US, so it’s possible none of these models will be released west of the Atlantic either.

You can check out a brief video overview of the new models after the break.

5 replies on “3 new netbooks from Gigabyte”