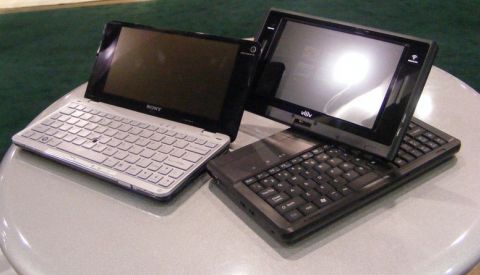 The Viliv doesn’t look much larger than the Sony device, but Sony hs a much btter looking keyboard which is both wider and longer. I’m guessing typoing on the Sony Vaio P will be a bit more fun than on the Viliv S7. But the S7 features both a touchscreen and a small touchpad which should make it a bit easier to navigate the 1024 x 600 pixel display.

Viliv has also loaded an application on top of Windows XP designed to make it easy to access your applications and media using the touchscreen.  You can see a short video demonstrating the software at Engadget. But probably the best news is that Viliv says the S7 will cost “less than the Vaio P.” Of course, the Sony Vaio P has a starting price of $899, which means you can find a used ca for less if you look hard enough (and don’t need brakes). But I’m hoping that the Viliv S7 could come in at under $700 and give Asus, Gigabyte, and other touchscreen netbook makers some competition.