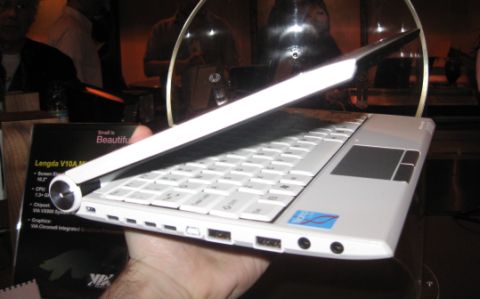 VIA is holding a press event this afternoon where the chip maker is showing off a ton of real and conceptual netbooks running VIA C7-M and Via Nano processors. The VIA C7-M chip has been around for 4 years or so, and it’s getting a bit long in the tooth. While it’s certainly a low power chip, it doesn’t really hold a candle to the Intel Atom CPU in terms of graphics and multitasking performance. And that’s where the Nano processor comes in.

VIA has been talking about the Nano cchip for at least half a year, but today is the first time I actually saw any devices using the processor. It consumes more power than the VIA C7-M or the Intel Atom, but it provides a bit more oomph.

The netbook in the picture above is a Lengda V10A Mini-Note computer. It has a 10.2 inch display, a 1.3GHz VIA Nano CPU, the VIA VX800 chipset, and integrated Chrome9 graphics. And it’s available now (or will be soon) in China. And there’s the rub. Right now, no computer makers have announced plans to bring a VIA Nano-based device to market in the US or Europe. It’s possible that if the platform takes off in Asia, we could see western companies bring rebranded versions of those netbooks to market. But VIA isn’t ready to announce anything along those lines yet.

The Lengda V10A isn’t alone though. Sitting just a few feet away was a similar netbook called the WinWard Luffy Plus, with virtually identical specifications.

You can find some more pictures of the Lengda V10A and WinWard Luffy Plus after the break.