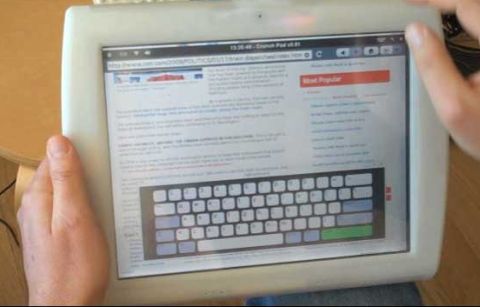 TechCrunch’s Mike Arrington started an intriguing project last summer. The goal was to build a $200 tablet designed for browsing the web, watching online video, and generally doing things that you can do in a browser. The idea was that since the hardware and software didn’t need to support any application other than the web browser, you could cut costs in a lot of areas.

Half a year later, the team working on the TechCrunch tablet (known for now as the CrunchPad) have built a second prototype. Unlike the first prototype which basically turned on and off, the latest CrunchPad is a functional tablet with a 12 inch display, a VIA Nano CPU and a full blown Ubuntu Linux operating system, although the primary interface is a custom web browser that I’m pretty sure is based on Firefox, and an on-screen keyboard.

If Arrington and crew could have pulled this off for the target price of $200, I’d be impressed. But Arrington says if this device actually goes into production, $299 is probably a more realistic price. And at that price, you could probably pick up an 8.9 inch or 10 inch netbook. Sure, there’s some appeal to the idea of a device with a touchscreen and a larger display. But I’m not sure why I would pay $299 for a device that only functions as an internet tablet when I could spend the same kind of money and get a computer that runs native apps as well as web applications, and which comes with a full keyboard making text entry a lot easier than on a hunt and peck onscreen keyboard.

But maybe that’s just me. What do you think? Would you buy a CrunchPad for $299? Let us know in the comments.

And you can check out a video of the prototype in action after the break.