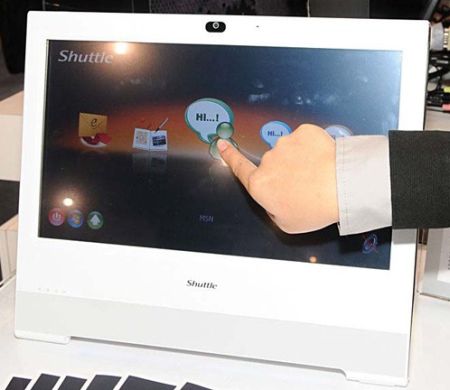 There was a time when Asus was known for making motherboards and Shuttle was known  for making small form factor desktop computers. But now the two will be going head to head in the low cost all-in-one desktop market. Both companies are leveraging their areas of expertise to produce what is essentially a cheaper version of an iMac.

Asus has already brought its Eee Top desktop to market in Europe and after showcasing the product at CES, plans to bring it to the US. The Eee Top looks like a computer monitor with a touchscreen, but it is actually a full fledged computer running Windows XP and using the same basic components as an Eee PC netbook including an Intel Atom CPU.

Shuttle, on the other hand, has been making tiny desktop for ages, and is getting ready to build one into a monitor. The Shuttle X50 will be available in April for $599 with Windows XP or $499 with no operating system.

The Shuttle X50 will have a 15.6 inch touchscreen and the dual core version of the Intel Atom CPU (The Eee Top and MSI’s NetON all-in-one PC both use a single core Atom chip).