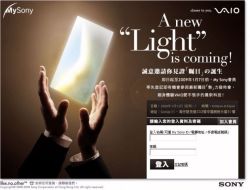 Sascha at Eee PC News has received a tip about the upcoming Vaio P subnotebook from Sony, and if his info is correct then it will be fairly safe to say this mini-laptop will not be a netbook in the traditional sense – becuse it will cost too much. Sascha reports that the Sony Vaio P will carry a 700 Euro price tag in Europe, which is about $975 at today’s exchange rate. And that’s about twice as much money as most netbooks on the market.

So what exactly will the Sony Vaio P have that sets it apart from other, cheaper mini-notebooks? For starters, it will have a ridiculously wide screen with a 1600 x 768 display resolution. And it will have 2GB of RAM and a 1.33GHz Intel Atom Z520 CPU. The notebook will run Windows Vista rather than Windows XP. And it appears to have some sort of tracking device in the keyboard instead of a touchpad which would take up too much space on this tiny machine.

It remains to be seen whether the Sony Vaio P will offer enough of a performance or convenience boost over current netbooks to be worth the high price – or even if that is the final price. But we’ll probably find out more next week at CES.

The image on the right, by the way is the latest advertising teaser uncovered by Jenn at Pocketables.