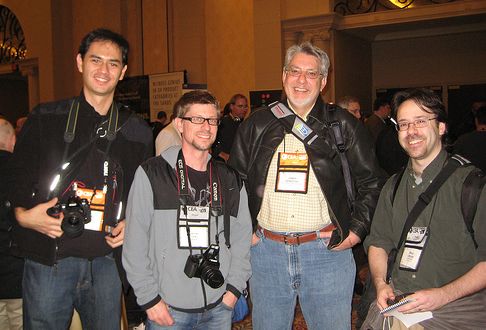 Just in case anyone had any doubts that I’m actually in Vegas this week getting very little sleep and spending lots of time surrounded by gadgets, Xavier from Notebooks.com uploaded this photo to Flickr. From left to right that’s Xavier Lanier, Kevin Tofel and James Kendrick from jkOnTheRun, and me. As it turns out tech bloggers who live in Pennsylvania are significantly shorter than their counterparts from other locations. This conclusion is based on a sample size of four, but I think it holds some weight.

This photo was taken at CES Unveiled last night, but I’ve also had a chance to catch up with Joanna Stern from Laptop Magazine, Sascha Pallenberg from Netbook News.de, and old friends like Dave Zatz of ZatzNotFunny and Ben Drawbaugh from EngadgetHD.

So yeah, I’m having a lot of fun so far. On the flip side I came down with a nasty cold this weekend and I haven’t entirely beaten it. I’m feeling a lot better and sneezing a lot less today, but I’ve completely lost my voice. Which has a way of making things difficult when  you want to interview people!

8 replies on “Photographic proof that I’m here (at CES)”