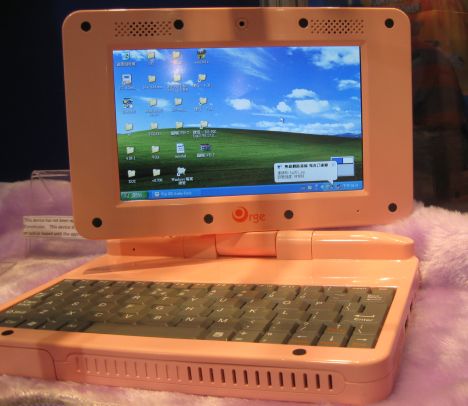 Asus, MSI, and HP have been making a big splash with netbook announcements over the past few days. But I took a trip off the beaten path (really I was just trying avoid the crowds – they really know how to beat a path!) and happened across this little guy hanging out at the Universal Microelectronics booth.

The company is a ODM based in Taiwan, so if and when this netbook ever comes to market, it won’t bear the Universal Microelectronics name. And at first glance, it’s a chunky little beast with a 7 inch display and a VIA C7-M CPU. But when you look a little closer it hsa a few neat features.

First, it has a touchcscreen display and a swivel that lets you fold the screen down over the keyboard for use in tablet mode. And second, while there’s no built in 3G modem, there are three expansion ports on top of the device. The booth representative told me that two of the slots were for ExpressCards and the third was for SD cards, but that middle one doesn’t look like any ExpressCard slot I’ve ever seen before.

You can find a picture of those expansion slots and another photo of the netbook prototype after the break.