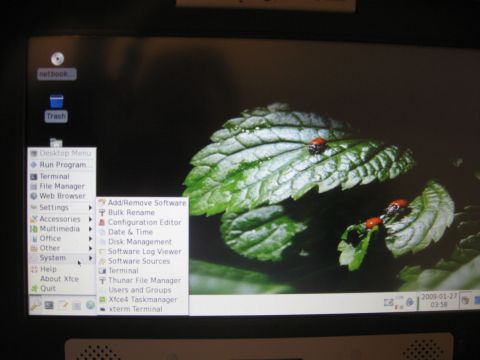 Moblin is a custom Linux distro optimized for netbooks and mobile internet devices or MIDs. Or at least it will be. Right now it’s still a work in progress. But the project is funded by Intel, so there’s plenty of reason to expect big things from Moblin.

Yesterday the team behind the operating system announced the release of Moblin v2 Core Alpha. This is a very early build of Moblin v2, and it’s optimized for netbooks with the Intel Atom processor. There’s no support for touchscreen devices at the moment, and WiFi won’t work on some netbooks, including the Asus Eee PC 901. For now the user interface is based on XFCE, but eventually the team plans to do something different with the UI.

OK, enough about what’s not in Moblin v2 Core Alpha. What you wil find is the core fils that will make up the basis of Mobline, and a new “fast boot” feature which should, you know, result in uick booting. I didn’t really get a chance to test this out, as I ran Moblin as a LiveCD on my test rig. Since wireless wasn’t working, there wasn’t much reason to install it to the hard drive.

The disc image weighs in at just over 250MB, so this is a pretty light weight operating system, as you would expect of something designed for netbooks.

I couldn’t grab a screenshot using the built in software, so I snapped the photo you see above. Anyone want to venture a guess as to which netbook I’m using? I’ll send a 512MB USB flash drive that I picked up at CES to the first person who guesses right (make sure you enter a valid email address when you leave a comment).

Update: The flash drive contest ended a few minutes after it started. Way to go Drew!