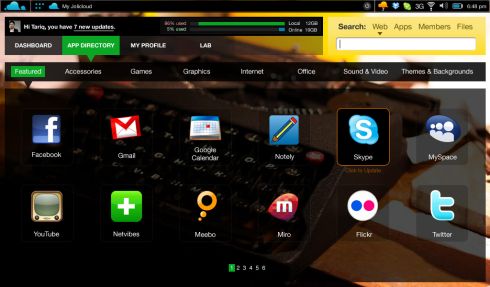 Jolicloud is an operating system that’s being designed specifically for netbooks. It’s based on Ubuntu Linux at the moment, which means that it can run many Linux desktop apps, but it’s really designed to provide quick and easy access to internet based applications like Facebook, Gmail, Skype, and Twitter.

Last time we got a peek at Jolicloud, the operating system looked a lot like Ubuntu Netbook Remix, because the developers borrowed the netbook remix interface and peppered it with desktop icons for web apps. But last night the Jolicloud team posted an image of the operating system’s new user interface on Flickr. As you can see, the OS borrows a few ideas from Xandros Easy Mode, Ubuntu Netbook Remix, and Linpus Linux Lite. It features a number of tabs for categories like games, graphics, internet, and office. And under each tab are a group of icons for desktop or web based programs.

But JoliCloud’s new UI also features a few other changes. Sinc the goal is to create an always-connected kind of interface for devices that will most often be connected to the internet, the team created a status notification icon set that looks more like the icons you’d find on a cellphone than your typical Linux icons.

I got a chance to catch up with Jolicloud founder Tariq Krim at CES. He’s also the guy behind the Netvibes personalized internet start page service. He explained that Jolicloud will also have some social features, allowing  users to recommend applications to their friends, for example. There are also plans to create an open API to make it easy for developers to create custom apps for Jolicloud. And one of the most interesting ideas was to create a driver database that works like CDDB database for music, helping to make sure that Jolicloud will work with a wide set of hardware.

The full operating system won’t be availabl to the public for a while, but an early test build may be released in the not too distant future.

2 replies on “Jolicloud OS for netbooks grows up, gets its own interface”