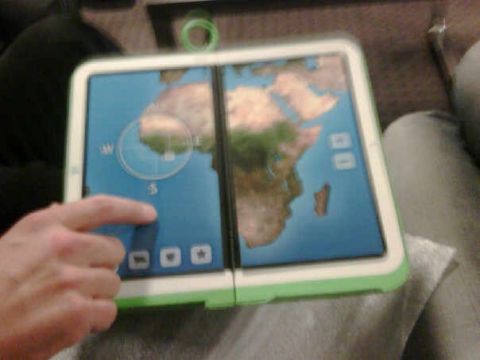 The OLPC project may be suffering from a poorly received give one get one program, and staffing cuts due to budget constraints. But it appears the group is moving ahead on plans for the next generation XO Laptop, which could be available in 2010, if the OLPC project is still going a year from now.

And how do I know that the work is underway on the OLPC version 2? Because Netvibes and Jolicloud founder Tariq Krim snapped a photo of a mockup in Davos today. The photo was only shared with Krim’s Facebook friends, but lucky for us Sascha from Netbook News.de grabbed the image and uploaded it to Flickr.

Right now all we’ve got to go on is a blurry cellphone picture. (Update: This is most likely a non-working mockup) No word on how well this protoype works, what kind of processing power or battery life it has, or anything else. But the machine does look remarkably like the concept photos that were released last summer. It appears to have two touchscreens allowing the device to be held flat for use in tablet mode. Theoretically you should also be able to fold the computer into a clamshell shape and use an on-screen keyboard on one of the displays for touch typing.

It’s a neat concept, but that touchscreen/keyboard is going to have to be pretty responsive if it’s supposed to be an alternative to a normal keyboard. Of course, the target audience here isn’t adults who are used to touch typing. It’s kids who may have limited or no experience at all with old fashioned keyboars. And if we’ve learned one thing over the last few years from cellphone keyboards, it’s that kids can learn to type on anything if it helps them communicate.

I’ll be curious to see whether the OLPC project helps bring down the cost of this technology enough that we’ll see other computer makers try to incorporate dual touchscreens into their devices. What do you think? Would you want a netbook or laptop that looks like the OlPC v2? Or would you rather have a standard keyboard?

8 replies on “Is the OLPC 2.0 the future of computing or just a silly idea?”