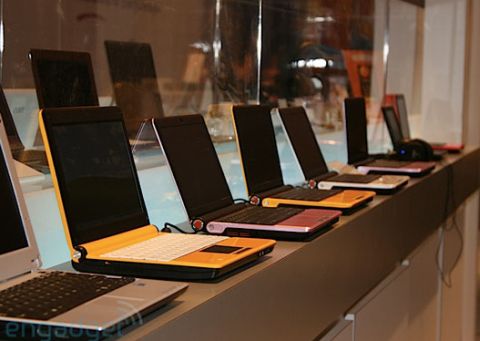 Just in case you couldn’t tell by the barrage of articles I’ve been posting over the last few days, CES is huge. Like think of a really big convention. Yeah, it’s bigger than that. Anyway, I spent most of my day hanging out in the Las Vegas Convention Center South Halls 3 and 4 today. But tomorrow I hope to work my way down to the Central Hall and a few other locations where I’ll be able to get a closer look at hidden gems like the $200 Coby netbook that Engadget spotted today.

Last month we reported on a rumor that Coby would be entering the netbook game, and then Coby promptly denied it. But then blogger James Kendrick noted that Coby had filed for a trademark for the term “Coby Netbook,” and those filings don’t come cheap, so why seek one for a name you don’t plan to use?

Anyway, Coby reps told Engadget that the models on display at the show represent a “market research product” which means Coby might never actually bring these things to market. But the company does have a good track record of producing cheap if not necessarily high quality devices. I’ll try to get more details tomorrow including possible specs.

Update: I visited the Coby booth today and discovered 6 separate netbook models that the company plans to bring to market, with prices ranging from around $139 to $299. Many details are still up in the air, including the release date, distribution channels, and possibly even the specs on these mini-laptops. But Coby is most certainly dipping its toe in the netbook waters.

4 replies on “Hey whaddya know, Coby DOES have a netbook”