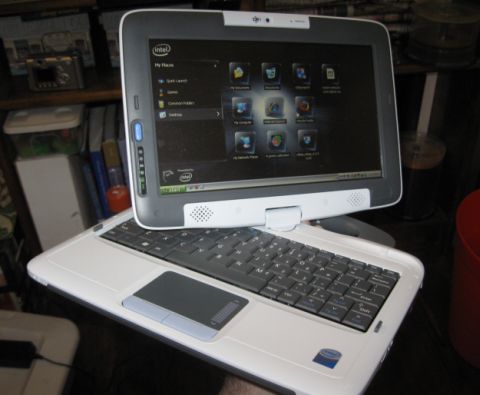 The folks at CTL were kind enough to send me a 2Go PC convertible netbook/tablet to play with for the next few days. I’ll have a full review soon, but after playing with the computer for a few hours, I wanted to share a few initial thoughts:

I’m still getting a feel for the preloaded software. The CTL 2Go PC is based on the Intel Classmate PC reference design, and it looks like Intel developed some of the software while CTL chose some other applications to include. The computer ships with Windows XP Home Edition instead of Tablet edition, but it includes a handwriting recognition application and two separate program launchers for use with the touchscreen.

I’ll have a full review in a few days, but if there are any burning questions you have, feel free to ask away in the comments and I’ll do my best to either answer them here or in the review.