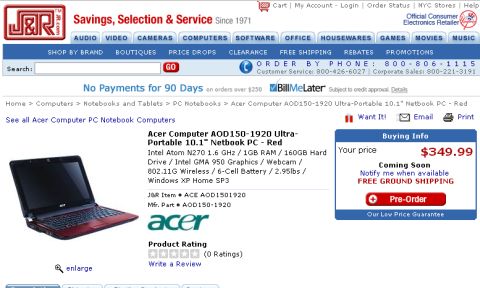 New York-based retailer J&R has posted product pages for the soon-to-be-released 10.1 inch Acer Asprie One netbook. And despite initial reports that the computer could cost between $400 and $600 overseas, it looks like J&R expects to sell the netbook for just under $350, which makes me feel a lot better about the rumors that Acer could phase out its 8.9 inch netbook and replace it with the new model.

J&R is taking pre-orders now, and says the laptops are “coming soon.”