Linux4one is a custom Linux distribution based on Ubuntu and built specifically for the Acer Aspire One netbook. The first version of the OS was only available in Italian, but Release Candidate 2 is now available with English localization.

Linux4one RC2 features the Ubuntu Netbook Remix interface for small screen laptops like the Aspire One. It also has a custom kernel built to support the Aspire One’s hardware. Most hardware should work out of the box, including the SD card slot, microphone, and WiFi. 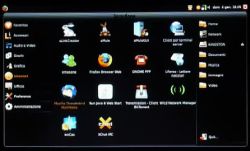 The operating system also comes with a handful of applications preloaded, including Flash 10, OpenOffice.org 3.0, and the VLC media player. Most of these apps are available from the Ubuntu repositories, but it’s nice to have them built in. Of course, if you’d rather remove or replace them, you can always uninstall these programs using the Synaptic Package Manager.