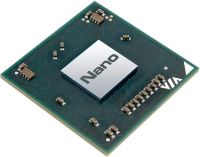 Considering all the buzz that VIA’s low power, high performance Nano processor got this summer, it feels like the chip has fallen off the face of the earth. I’m not aware of a single netbook using the processor at the moment, although VIA has turned its attention to educational and developing markets, so it’s possible that Nano-powered machines are popping up… somewhere.

But all of this doesn’t mean that VIA isn’t looking ahead. Chinese language site HKEPC reports that VIA plans to launch a dual core Nano 3000 series processor in 2009. The chip will reportedly be launched before the second half of 2009.

The news is hardly surprising. Intel and AMD have already announced plans to release low power dual core chips. But the last I’d heard, VIA wasn’t expecting to have its dual core Nano chip available until 2010.

One reply on “VIA reportedly working on dual core Nano CPU”