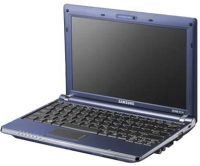 Samsung is reportedly working on its successor to its popular NC10 netbook. At first blush, the NC10 didn’t look like anything too special. Like many of its competitors, the netbook has a 1.6GHz Intel Atom N270 CPU, a roomy hard drive, and a 10.2 inch screen. But thanks to excellent build quality, superb battery life, and a better than average keyboard, the NC10 has become one of the more popular netbooks among mini-laptop enthusiasts.

So what does Samsung have planned next? Honestly, I don’t know. But French site Blogeee has received some information indicating that the company will release several new models in April.

I’d be more surprised if Samsung wasn’t working on a sequal to the NC10. But it’s nice to know that we’ll see new models in less than half a year, even if we don’t know what features these new netbooks will have just yet. My money’s on a lighter weight machine, possibly with a touchscreen display. And if we’re lucky maybe a dual-core processor or an NVIDIA GPU.