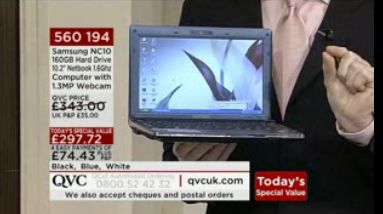 I learned two things today. First, the Samsung NC10 netbook was recently featured on the QVC  shopping channel in the UK. And second, there’s a version of QVC in the UK. The network is based in suburban Philadelphia not too far from where I sit writing this blog post, but I had no idea how far its reach was.

As expected the hosts talk about the Samsung NC10 as if it were the greatest thing since sliced bread. But I have to say, they do seem to get most of the elements right. The NC10 is one of the most highly rated netbooks due to its excellent build quality, screen, and battery life.