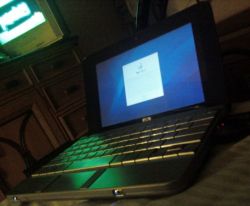 When Boing Boing released a Hackintosh Mini compatibility chart a few weeks ago I was surprised to see that the HP 2133 Mini-Note was listed as a netbook capable of running the Mac operating system. After all, Macs have Intel processors, while the HP 2133 uses a VIA CPU. It turns out that’s not a deal-breaker. The OQO handheld PC also has a VIA processor, and you can get OS X to run on it. And at least a few people claim to have done the same with the HP 2133.

Things are much simpler with the new HP Mini 1000/Compaq Mini 700 netbook. It has the same Intel Atom CPU as the MSI Wind U100, Dell Inspiron Mini 9, and other netbooks that people have been running OS X on for ages. (Or months, anyway). For some basic instructions on installing OS X on an HP Mini 1000, checkout the My HP Mini Forums. And to see what the finished product looks like, check out the video after the break. Ethernet and audio reportedly don’t work, but WiFi and USB does.