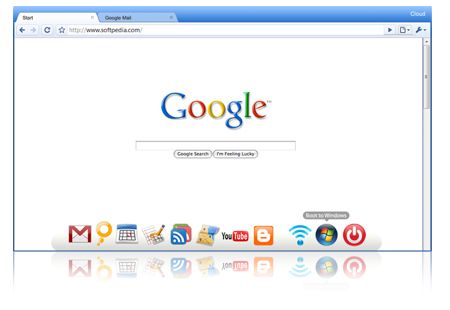 Good OS, the makers of the gOS, Ubuntu Linux-based operating system are showcasing a new version of their product called gOS Cloud. I’ve written more about it at Download Squad. But in a nutshell, the idea is that the operating system is designed around the web browser. In fact, you can load the web browser within a few seconds of pressing the power button, which lets you get online right away.

Good OS has been trying to position their operating system as a good fit for netbooks for ages. Or for what passes for ages in a market that’s barely over a year old. While gOS can run pretty much any application that runs on Ubuntu, the operating system’s claim to fame is its integration with web-based services like Gmail, Google Docs, and YouTube. In other words, applications that are hosted online in the “cloud” and which don’t run natively on your computer.

The concept makes a lot of sense. After all, netbooks tend to be underpowered when compared with more traditional laptop and desktop computers. So why exert a lot of processing power to load local apps when all you really need is a web browser than can reach remote applications? But if you think about it, web-based applications aren’t exactly choc full of powerful features. After all, Google, Zoho, and other web service providers have to make sure their applications can interface with thousands or millions of web browsers simultaneously. So while it’s certainly nice that gOS offers a few big buttons that let you access web apps, the truth is you can easily run native desktop apps like OpenOffice.org that probably offer more features than the web apps.

On the other hand, the nice thing about Cloud Computing isn’t just that you don’t need to install and run software locally. It’s that you can access it from any system. And since most people probably don’t use a 8.9 inch netbook as their primary computer, cloud-based applications like Google Calendar can be a great way to update your data on one comptuer and access it on another. In other words, you can upload your Word or Excel documents to Zoho Office from your home or work computer, and edit them on the go by logging into your Zoho account on your portable machine. Or you can update your appointments with Google Docs.

Will gOS be the next big thing in netbook operating systems? I somehow doubt it. The company pre-loaded its software on the Everex Cloudbook earlier this year. And neither Everex nor gOS exactly became household names. But Gigabyte and Good OS are working together to offer a netbook pre-loaded with gOS Cloud and Windows XP in early 2009. So I won’t be too quick to write the OS off.