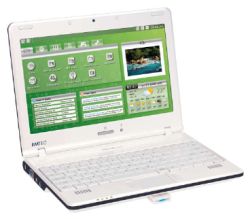 The folks behind the upcoming Gdium netbook have launched a new program they’re calling “One Laptop Per Hacker.” The goal is to build a more robust developer community around the company’s unusual netbook platform. The Gdium uses a custom version of Mandriva Linux which runs from a removable USB flash drive called the G-Key. Because the OS runs on a removable stick, you can carry your desktop environment and files with you from one computer to another (which honestly seems like it would be a much more useful feature on desktop PCs than on ultraportable laptops).

Developers who are selected to be part of the program will get a pre-release version of the Gdium netbook, a G-key, and a chance to work with the Gdium develoment team.

In order to qualify, you’ll need to register for the program and describe your plans for the platform. If you’re selected to be part of the program, someone from Gdium will contact you with more information.