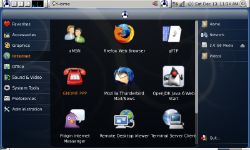 Want to install Ubuntu on an Asus Eee PC but don’t feel like making all the manual tweaks to make sure the operating system runs as smoothly as possible on your hardware? Eeebuntu is a custom version of Ubuntu Linux that supports the WiFi, graphics, touchpad, webcam, and sound drivers for most Eee PC models out of the box.

Eeebuntu 8.10, which is based on the latest version of Ubuntu was released this weekend. It comes in three flavors. The standard edition inclues a full Ubuntu desktop and all the applications that come with the operating system including Firefox, OpenOffice.org, and Pidgin. The NBR edition is basically the same but it uses the Ubuntu Netbook Remix interface which is designed to make it easier to find and launch programs on devices with low resolution displays.

The third version is called Base, and it’s  a stripped down version of Ubuntu which has all the basic system files you need but doesn’t have any unecessary applications preloaded. This saves hundreds of megabytes of disk space, which can come in handy if you have an Eee PC with just 4GB of storage space. You can always install OpenOffice.org or other apps one by one if you decide you need them.

The Eeebuntu servers are being hammered at the moment so it could take a while to get the pages to load. But you can also download the NBR and Base or Standard editions via BitTorrent.

Ubuntu Eee 8.10, another custom Ubuntu distribution for the Eee PC is scheduled for release next month, although it will likely have a new name due to trademark issues.