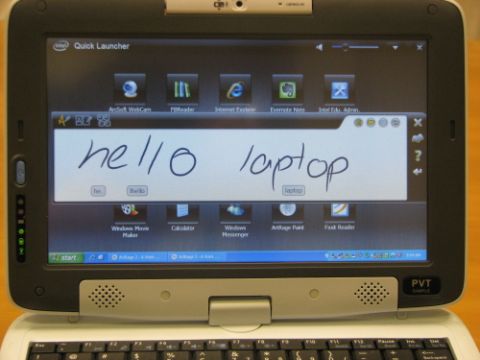 The next generation of Intel’s Classmate PC design looks a lot like the second generation in that the netbook has a rugged design, an 8.9 inch, 1024 x 600 pixel display, a 1.6GHz Intel Atom CPU and runs Windows XP. But there’s one major difference: It has a touchscreen display that can swivel 180 degrees and be folded down so that you can use the netbook as a tablet PC.

CTL will be selling the Classmate tablet in the United States. The machine is primarily targeted at educational markets. But CTL will also make the netbook available to retail customers, likely through Amazon and other online stores.

We’d already seen a few photos of an early build of the Classmate 3. But now Laptop Magazine has gotten up close and personal with a unit that’s pretty close to the netbook that will ship in mid-January. The hardware is a bit sturdier and the software has gotten a major tuneup. In addition to the custom program launcher application, Intel has added some handwriting recongition software and an on-screen keyboard.

CTL and Intel certainly aren’t the only ones planning on adding touchscreen capabilities to low-cost ultraportable computers in the near future. But they’re the first companies to announce they’ll be showing a touchscreen netbook at CES next month.