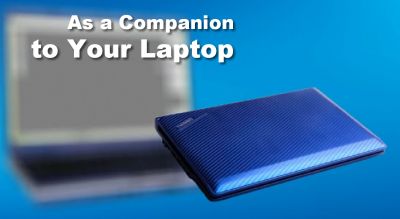 There’s been a lot of talk over the last few days about the word “netbook.” I think it’s silly that Psion is starting to protect its trademark a year after people started using the word netbook widely. But at the same time, I’ve never been a huge fan of the word. Because it implies that mini-laptops are only good as dumb terminals for accesing the internet. And that’s just not true. You can use them to watch movies, edit documents, play video games, or do pretty much anything else you would expect a 2-3 year old computer with a single core CPU to do.

But you’d never know that if you watched this Flash presentation from Best Buy. The company implies that netbooks are only good as companions to your primary computer. And while I typically recommend that people purchase netbooks for their mobility and larger computers for processing power, the truth is that many people can and do use netbooks or low power nettop computers as their primary PCs.

Of course, Best Buy, like Intel (the company that started pushing the term netbook to describe computers with its low power Atom CPU) has a vested interest in convincing you to buy two computers intead of one. You know, cause they make more money that way. And this isn’t the first time we’ve seen Best Buy claim that a netbook isn’t really a full fledged computer. What’s interesting is that Best Buy claims that netbooks are all Atom-powered, which isn’t true. I can only guess that the company has been influenced not just by the word netbook but by Intel.

Anyway, I’ll continue to use the word netbook interchangeably with “mini-laptop” and other terms, because it’s now the widely accepted term and because you can only type “mini-laptop” so many times. But this Best Buy presentation serves as a reminder of why the word is problematic.