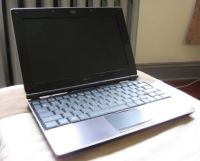 The Asus Eee PC 1002HA one of the best looking netbooks Asus has released since creating the category of low cost mini-laptops just over a year ago. The machine has a professional looking brushed metal exterior and it weighs less than its predecessor the Eee PC 1000H. But on the inside, it’s basically the same computer, with the same processor, RAM, storage capacity and other features.

So how does the Asus Eee PC 1002HA stack up against its predecessor and other netbooks on the market today? Read on to find out.

The netbook measures 10.4″ x 7.1″ x 1.1″ and weighs 42 ounces, which makes it a little thinner and narrower than the Eee PC 1000H, and about 11 ounces lighter. While the Eee PC 1002HA is still one of the larger netbooks available today, it looks substantially smaller than its predecessor.

What’s interesting is that the netbook uses a completely different type of battery than the Eee PC 1000H.  The 1000H has a 6 cell, 6600mAh battery that protrudes from the bottom of the unit and sits flush with the back of the netbook. The Eee PC 1002HA battery sits flush with the bottom of the unit and does not take up any space on the back of the computer.

In other words, the battery design accounts for most of the difference between the two netbooks. If you place them side by side, you’ll see that the bodies of the mini-laptops are just about the same thickness. But the 1000H battery adds some height to that machine.

Because the battery doesn’t take up any room on the back of the machine, Asus has spread out the ports on the Eee PC 1002HA. The company’s earlier netbook models placed the 3 USB ports, the VGA output, the power jack, and the SD card reader on the left and right sides of the computer. The Eee PC 1002HA moves some of those ports to the back of the netbook. 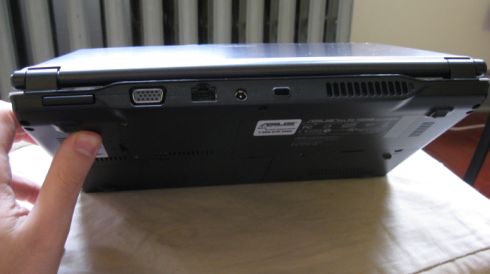 The Eee PC 1002Ha features a number of vents on the sides and bottom of the unit, which help keep the laptop from getting too hot. Overall, it seems to run significantly cooler than the Asus Eee PC 701, Asus Eee PC 1000H, HP Mini 1000, or HP 2133 Mini-Note, four other netbooks I’ve spent time with. 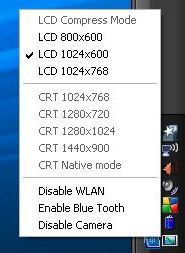 The Eee PC 1002Ha has a 10.2 inc, 1024 x 600 pixel matte display. You can adjust the brightness by hitting the Fn+F5 and Fn+F6 keys. The matte display is slightly better for reading outdoors than the display on netbooks with glossy screens like the HP Mini 1000. But few existing mini-laptops, with the exception of the OLPC XO Laptop, are truly designed for outdoor use.

Asus includes an Eee PC Tray utility for Windows which lets you adjust the screen resolution with the click of a button. While the netbook has a native display of 1024 x 600 pixels, you can adjust the screen to show 800 x 600 pixels (which can come in handy for some video games), or 1024 x 768 pixels.

The higher resolution is achieved either by squashing some pixels to fit on the screen better or by extending the desktop beyond the top and bottom borders of the screen. In this mode, you need to scroll your mouse up or down in order to see the top or bottom of the screen.

The keyboard is exactly the same as the keyboard on the Asus Eee PC 1000H. For some people this will be a good thing. For others, not so much. 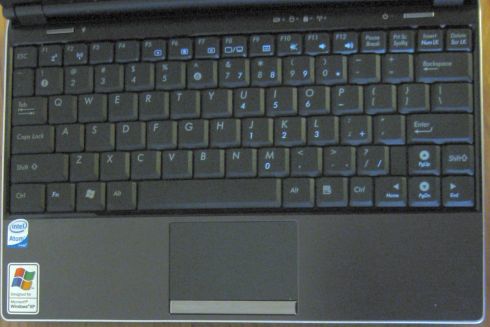 On the one hand, the keys are relatively large, evenly spaced, and concave. Few of the keys have been reduced to an unreasonably small size to fit on the not quite-full sized keyboard. But the right shift key is awkwardly placed to the right of the up arrow. And it’s much smaller than the right shift key on most full sized keyboards. So if you frequently use that shift key you’ll either need to retrain your fingers to use the keyboard or stay away from Asus netbooks altogether.

The touchpad supports multi-touch gestures. For example, you can scroll up and down by placing two fingers on the pad and moving your fingers up and down instead of using a narrow strip to the right side of the touchpad as you do with many other netbooks and laptops. Asus has replaced the two distinct touchpad buttons found on the Eee PC 1000H with a single button with a rocker. It looks a bit sleeker, and registers rigth and left clicks just fine. But I personally prefer having two distinct buttons.

Asus has also done away with the 4 separate user-customizable buttons found on the Eee PC 1000H. The 1002HA has a single button which can be used to toggle between Power Saving, High Performance, and Super High Performance modes.

One thing I’ve noticed is that it’s slightly more difficult to open the lid on the Eee PC 1002HA than the 1000H. This is because the lid comes almost to a point that’s flush with the bottom of the case, while the Eee PC 1000H lid is a bit more rounded, resulting in a sort of lip that you can easily grip when opening the netbook. Both lids have a nice solid feel to them and don’t shake at all when the netbook is open.

In order to reduce the size and weight of the Asus Eee PC 1002HA, Asus chose a 4200mAh battery that fits flush with the bottom of the unit. This means the computer will not run as long as some other Asus Eee PC models on a single charge, and Asus has no plans to develop an extended battery for the Eee PC 1002HA.

That said, the netbook does get reasonably good life out of this 31W/hr battery. 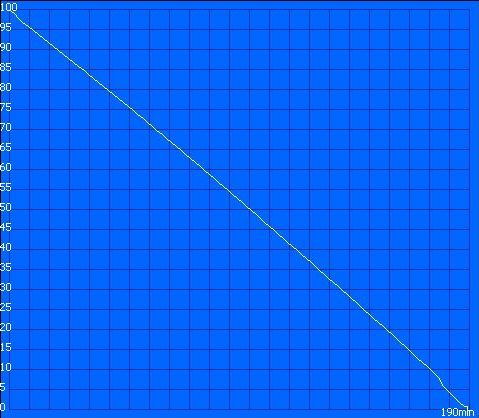 I ran the Battery Eater Pro test while the machine was running in Power Saver Mode (which means the CPU was underclocked to 1.2GHz), and the battery lasted for about 3 hours and 10 minutes. The test is designed to tax the battery, so under normal usage conditions, I would expect to get between 3 and 4 hours of use. And in fact, when I took the netbook out to a coffee shop over the weekend, I was able to work for close to two hours before the meter showing the remaining battery power hit the 50% mark.

As with all Eee PC models, Asus has included the “Super Hybrid Engine” software, which allows you to run the netbook in Power Saving, High Performance, or Super High Performance modes. Those modes basically translate to CPU speeds of 1.2GHz, 1.6GHz, and 1.7GHz. For basic web browsing and other ligth weight tasks, Power Saving Mode offers decent performance. But you may need to use one of the higher performance modes when watching some videos or playing games.

Asus includes the Super Hybrid Engine software for controlling the CPU speed and the Eee PC Tray utility for adjusting the display resolution and toggling hardware including the webcam, Bluetooth, and WiFi.

The model I reviewed also came with InterVideo WinDVD, Microsoft Works, and StarOffice 8. Both Works and StarOffice include a word processor, spreadsheet app, and other basic office utilities.

Like most other netbooks with a 1.6GHz Intel Atom N270 CPU, 1GB of RAM, and a 5400rpm hard drive, the Eee PC 1002HA is easily able to handle every tasks like web browsing or editing office documents. I had no problem opening 5 or more web pages simultaneously in Firefox, Google Chrome, or Internet Explorer 7. The laptop also easily streamed standard definition video from Hulu.

The Eee PC 1002HA boots Windows XP pretty quickly. It goes from zero to a fully usable Windows desktop in just about 40 seconds. It takes 18 seconds to shutdown.

The speakers are pretty quiet, but the microphone seems to be a bit more sensitive than the mic on the Eee PC 1000H, which makes this netbook a decent choice for making Skype calls. Of course, you can plug a headset in for better results.

The Asus Eee PC 1002HA is smaller, lighter, and (with a list price of about $499) a little more expensive than the Asus Eee PC 1000H. It has a nicer looking exterior and ports that are spread out across the unit, with the VGA, power, and Ethernet ports on the back of the laptop. But the netbook also has a lower capacity battery and there’s no option to purchase a higher capacity battery.

So if your primary concern is battery life, you might want to look elsewhere. If you want all the power of an Eee PC 1000H in a case that weighs about 11 ounces less and you’re OK with 3.5 hours or so of battery life, the Eee PC 1002HA might be worth a look.

I couldn’t find a place to fit this picture into the review, but here’s are a few more shots showing the size difference between the Eee PC 1002HA and the Eee PC 1000H.

And a closer look at the brushed metal exterior and the power LED which is visile on the top of the netbook: 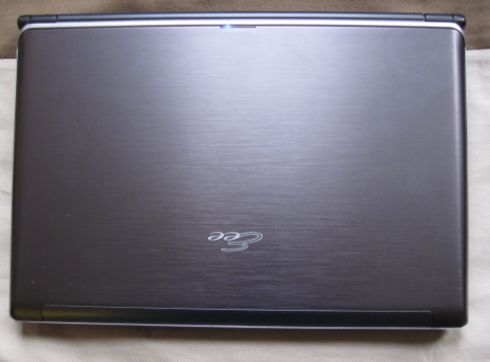 And because you can never get too much of a good (or halfway decent) unboxing video, here’s another look at the unboxing video I first posted the other day. Keep in mind, this is a review unit and I’m not the first person to open this box, so you’ll likely get a unit in slightly better condition if you buy an Eee PC 1002HA.

You can read more about the Asus Eee PC 1002HA in the Liliputing Product Database.