Lee Mathews is a computer repair worker in Manitoba, Canada. He’s a regular contributor to Download Squad, and the proud owner of an MSI Wind U100 netbook.


When I wrapped my last post – Vista on the Wind – I figured it wouldn’t be long before I said “So long, and thanks for all the fish,” and looked for a new experimental OS. I was right.

Here we are, a month later, and my Wind is now running the much-talked about pre-beta of Windows 7 Ultimate. Most people probably wouldn’t peg the Wind and its 1.6GHz Intel Atom CPU as a likely testbed for the latest Microsoft OS. Then again, no one was really rushing to try Vista Home Premium on one either – but I did it anyway.

Pre-beta DVD in hand I hooked up my trusty external DVD, began the install, and waited anxiously for it to complete. The install process took almost exactly the same amount of time, and I was a little disappointed to have the same missing drivers (wireless, LAN, display) but the original MSI XP drivers worked just fine.

Bear in mind this is Windows 7 Ultimate Edition I’ve installed. I’ve crammed more OS into my U100 than MSI probably ever dreamed – and it’s running great.

No, I’m not delusional. Microsoft is clearly working very hard to make 7 good enough that we’ll all forget about Vista’s failure to live up to the hype.

Improvements to the window manager and Aero theme provide stunning visuals even on an underpowered machine – a noticeable improvement over Vista’s sometimes sluggish effects. I was amazed at how smoothly win+tab cycled through a dozen applications including Windows Media Player 12 playing back a 700mb DivX video.

Visual task tips have been improved as well, with thumbnails updating in real time (or at least so near it that you’ll never notice the difference). Even WMP 12’s video thumbnails play smoothly, without so much as a hint of stutter.

Strangely, my Experience Index was lower by .4, dropping to 2.3 because of then Intel 945 chipset’s poor graphics performance. Regardless, the window manager remained responsive during all my normal use – only suffering when I purposely bombarded the Atom with far too many tasks at once. 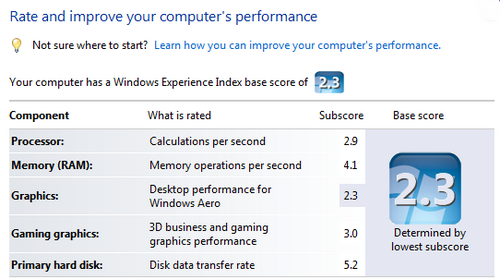 One of the big reasons I bothered trying the Vista switch last time was its improved power management. I expected the same performance with Windows 7: I got it, and a little more. Battery life was nearly identical with Bluetooth enabled in 7 as it was in Vista with the feature disabled. 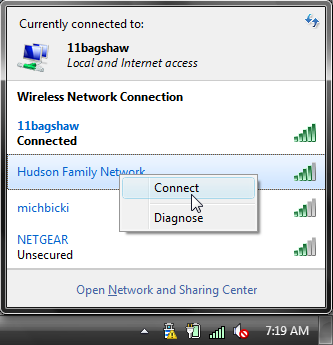 The Wind resumes from sleep in a flash, and the wireless is already good to go as soon as my display reappears (if not sooner). Awesome. If there’s one thing I hate about XP on the U100 (and XP in general), it’s the amount of time it takes to re-establish a wireless connection after it wakes.

Establishing and managing connections has been simplified. A single click will pop up a list of available access points, and you can simply right-click and entry to connect to it. That’s a welcome change from Vista’s cumbersome method.

Application performance with 7 is as good as or better than Vista. Firefox with multiple tabs and my usual collection of extensions consumes just under 100mb of memory with GMail, Reader, WordPress, and three other tabs open. On Vista the same scenario was typically in the 120-130mb range.

I can’t offer a direct comparison with Photoshop performance this time, as I’ve switched to the Gimp 2.6.1. It runs beautifully on the Atom and is much less resource-hungry. I find the Gimp interface better suited to the Wind’s 1024×600 screen.

For a pre-beta release, there’s plenty to get excited about. It looks as though work has been focused where it matters most: performance and ease-of-use. After seeing 7 in action, I’m not convinced there’s a need for the rumored netbook build. Really, if Ultimate runs this well a basic or premium version should be a perfect fit – especially when you consider how far netbooks will have evolved by the time Windows 7 is ready for release.

All in all, Windows 7 is even more enjoyable than Vista was, and it’s not going to be disappearing from my Wind any time soon.