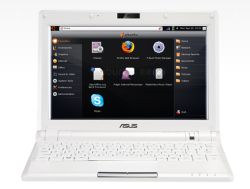 I’m a big fan of Ubuntu Eee, a customized version of Ubuntu Linux designed to run on most Asus Eee PC models. It feature the Ubuntu Netbook Remix interface, and comes preloaded with a whole slew of tweaks to make the open source operating system work with the Asus hardware. But unfortunately the latest version of Ubuntu Eee is based on Ubuntu 8.04. If you want the newer Ubuntu 8.10 you’re going to have to do one of three things:

I’m ruling out the first option because I’m basically lazy at heart. And I’m probably not the only one. While there are plenty of tutorials on the web that will walk you through the process of customizing Ubuntu 8.10, it’s much easier to find a custom distro that just works out of the box.

While Ubuntu Eee fits the bill, you’ll have to wait another month or so if you want to be on the bleeding edge. On the other hand, it’s not like there are a ton of new features in Ubuntu 8.10, so if you really like Ubuntu Eee 8.04.1, there may nothing wrong with waiting for the next version to be released.

UNR Eeedition is a new project that I recently discovered. Like Ubuntu Eee, it’s a custom version of the operating system that comes preloaed with packages to support Eee PC hardware. It was built for the Eee PC 901, but it should function on most Intel Atom-based Eee PC models, and possibly even on some older units with the Celeron processor, although I’m not making any promises there.

UNR Eeedition also comes with file manager Midnight Commander, and Remastersys, a utility that makes it easy to create a backup of your system on a LiveDVD.

Both Ubuntu Eee and UNR Eeedition can be installed using a USB stick, which comes in handy since Eee PCs don’t have optical disc drives.