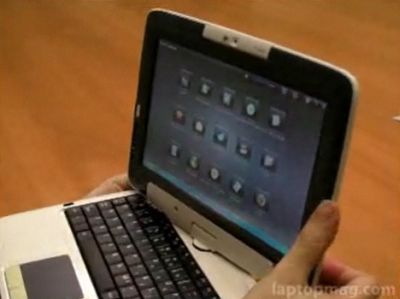 CTL plans to bring a sub-$500 touchscreen Tablet PC to the US market in the next few months. The netbook sized device is based on Intel’s third generation Classmate PC design. That means it’s designed primarily for the education market and has a fairly rugged case, and a big handle on the back of the computer to make it easy to carry around without a case.

I’m not a huge fan of the handle and Fisher price design of the CTL netbook tablet. But everything else about this little PC looks kind of awesome. Or almost everything anyway.

Laptop Magazine has had a chance to spend a few days with an early prototype. No, let me rephrase that. The early prototype. Right now CTL only has one unit to show off. The hardware’s not quite perfect. Some colors are a bit off and some of the components apparently feel a bit wobbly at the moment. But for the most part, the pre-production unit is similar to the computers CTL hopes to begin shipping in December and January.

What you get is a netbook sized device with a 1.6GHz Intel Atom CPU, 1GB of RAM, a 60GB hard drive, and an 8.9 inch, 1024 x 600 pixel  resistive touchscreen display. You can rotate the screen and fold it back to use the laptop in tablet mode. And it sports an accelerometer which rotates the display depending on how the screen is positioned.

CTL plans to offer Windows XP and Ubuntu Linux versions of the notebook, with the Linux version going for $499. The Windows model will probably cost a bit more. The version Laptop Magazine tested comes with Windows XP and a custom application launcher. What it doesn’t have is Windows XP Tablet Edition, which means it doesn’t have an on-screen keyboard or other tools that make the computer easier to use with a stylus or fingertip. Fortunately there are plenty of free or commercially available third party apps to add advanced touchscreen capabilities to Windows XP.