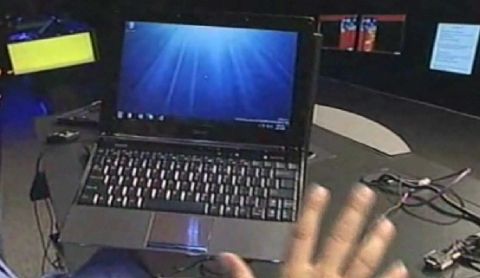 Update: Engadget confirms that this was a slip of the tongue, and not actually a netbook with a dual core CPU.

Probably not. But during a presentation at WinHEC yesterday, a presenter pulled out an Asus Eee PC S101 which he described as having 1GB of RAM, a 16GB SSD and a 1.6GHz dual core Atom processor. In other words, all the specs sound right except for that dual core bit.

Now, it’s certainly possible that Microsoft has access to some next generation technology that’s not available to the rest of us. But Intel has yet to publicly announce a dual core Atom CPU that’s small enough or which runs cool enough to run inside a netbook. The company has announced the dual core Atom 330 CPU, but it’s intended for nettops and other low cost, low power desktop computers. Not netbooks.

So I’m guessing this was just a mistake or a slip of the tongue. Because the Intel Atom N270 processor which is used in many netbooks supports hyperthreading with its single core processor, the Windows Task Manager will display it as two CPU cores. But it’s just as likely that the presenter is just so darned used to saying “dual core” before the word CPU that it slipped out.

Or maybe he knows something we don’t.

You can watch a video of the presentation at Engadget.

4 replies on “Did Microsoft just show off an Eee PC with a dual core Atom CPU?”