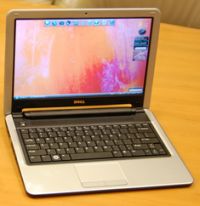 This is why I’ve never been a fan of the word netbook. Call them Liliputers; call them cheap subnotebooks; call them what you will. But the computers I’ve been most interested in for the last year or two have weighed about 3 pounds or less, had 10 inch or smaller screens, and cost around $500 or less.

The problem is that this category has caught on in such a big way that laptop makers can’t help but release computers that don’t really fall within the niche and call them netbooks anyway. After all, what’s a “netbook” but a marketing term made up by Intel to describe a computer that can be used to go online?

Anyway, I’m certainly intrigued by the form factor of the Dell Inspiron Mini 12 or the new Asus N20A. But no matter whether they have an Intel Atom CPU or a dual core chip from Intel or AMD, I have a hard time putting them in the same camp as an 8.9 inch ultraportable like the Acer Aspire One.

Yes, I know this isn’t the first time I’ve ranted on this topic. But today the first reviews started to pop up for the Inspiron Mini 12, and Asus officially unveiled the N20A and I just couldn’t help myself. It probably won’t be the last time I go off about this either. I’m not saying there’s no market for a cheap, light weight 12 inch notebook. I’m just saying please stop calling it a netbook, or start calling netbooks something else.

To Asus’ credit, the company isn’t calling its N10 or N20A laptops netbooks. But that hasn’t stopped a lot of bloggers and journalists from doing so.

Oh, and as for that Dell Inspiron Mini 12 review? Laptop Magazine says it has a better screen and keyboard than the Mini 9 (no surprises there), but says the performance is subpar. While most netbooks aren’t exactly speed demons, Dell decided to go with Windows Vista and an Intel Atom Z530 Silverthorne processor for this notebook, instead of the Intel Atom N270 Diamondville CPU and Windows XP OS you would get with a Dell Inspiron Mini 9. And the Z530 is noticeably slower.