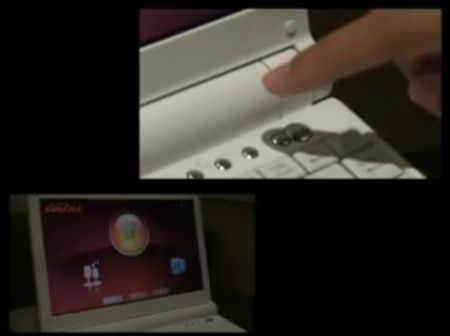 Just a year after the concept of the netbook was born, there are dozens, if not hundreds of netbooks to choose from. And to be perfectly honest, there aren’t a ton of things setting many of these models apart. Timothy Brown at VIA wrote in this morning to let me know about a netbook that does stand out from the crowd in a few ways.

The TongFang Imini first showed up at Computex this summer, where the product sheet said it would be sporting a VIA Nano processor. Now that it’s actually available in China, it appears the TongFang Imini is using the older (and less power hungry) VIA C7-M CPU. But there here are a few things that make it unusual by netbook standards:

To be honest, the ability to charge USB devices is a blessing and a curse. It’s a pretty nifty feature, but it also means you’ll want to make sure you don’t accidentally leave any devices plugged in when you’re not near a wall socket if you don’t want to run your laptop battery down.

The TongFang iMini will be available in Australia and Brazil early next year. It’s available in China for between 2998RMB and 4198RMB or about $439 to $615 US.

You can see a video overview of the computer after the break.

6 replies on “TongFang Imini – A netbook with two power buttons”