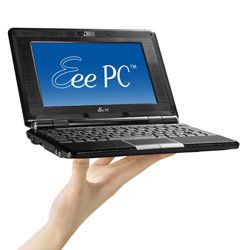 The state of the netbook is apparently pretty strong. Not only are the tiny laptops taking over the Amazon Sales charts, and hitting the top 10 list at Notebook Review, but they’re generally selling like hotcakes. According to DigiTimes, Asus shipped 1.7 million netbooks in the third quarter of 2008, with 700,000 shipped in September alone.

There are a few things to keep in mind here. First, Asus was the first compay to release a consumer-oriented netbook which has helped the Eee PC lineup to become highly visible. I’m not sure if other companies are shipping anywhere near this number yet.

Second, Asus has flooded the market with roughly a bazillian Eee PC models, so there’s no shortage of options for netbook shoppers looking to pick one up.

And third, the holiday shopping season is still ahead of us. Asus could easily top its September shipments in October, November, and December. While consumer spending in general could drop due to the credit crisis in the US, netbooks are typically much cheaper than larger laptops, which could make them even more attractive purchases this year.

2 replies on “What recession? Asus ships 700,000 netbooks in September”