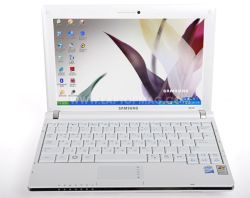 The other day Laptop Magazine ran the first comprehensive review of the Samsung NC10 that I’ve seen to date. Overall the NC10 performs as you would expect a netbook with a 1.6GHz Intel Atom CPU, a roomy hard drive, and 1GB of RAM to. But the killer feature was the battery. While the netbook has a 6 cell 5200mAh battery, (which is very similar to the battery that comes with the MSI Wind U100 netbook), the review claimed that the battery lasted 7 hours and 34 minutes. That’s about 2 and a half hours longer than you’ll get on an MSI Wind.

Laptop Magazine received a bit of flak for publishing this rather incredible figure after a single battery test. So they decided to run the test again. Twice. but this time, they took notice of a factor they hadn’t originally  accounted for: Samsung includes battery management software with the Samsung NC10. Among other things, it will dim the netbook’s screen to its lowest settings when you haven’t touched the keyboard or touchpad for 30 seconds.

In other words, while you can get 7.5 hours out of the battery, you’re likely going to want to keep the screen a bit brighter, which will reduce the battery time. So while the Samsung NC10 certainly has the best battery performance of any netbook I’ve seen to date, it’s not quite as spectacular as the initial test indicated. Unless you’re sitting in a very dark room where a dimly lit screen would suffice.