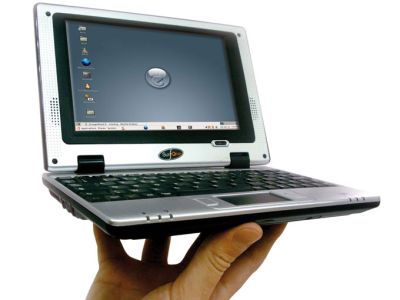 It looks like there are two more netbooks in the world based on the same reference design as the 3K Razorbook 400. French site Blogeee noticed a new netbook available from RueDuCommerce called the SurfOne INOS1, which sells for about 189 €, or about $257 US. It has a 400MHz Ingenic CPU, a 7 inch 800 x 480 pixel display, 128MB of RAM, and a 2GB SSD. As far as expansion and connectivity go, the SurfOne INOS1 series has an Ethernet jack, WiFi, 3 USB ports, and an SD card reader.

Meanwhile, UK computer distributor Elonex has put out a sequal to the company’s Elonex One £99 laptop. The Elonex One t+, which we first got a glimpse of a few months ago, is apparently now starting to ship. And one UK blogger took this netbook which looks like it’s probably based on the same reference design as the INOS1/Razorbook for a spin.

In general, he says the netbook has a decent keyboard, an awkward trackpad, and an easy to use custom Linux operating system with all the basic software you’d expect including a Firefox-based web browser, a chat application, aword processor, and spreadsheet app. The One t+ goes for about £129 or $226 US.