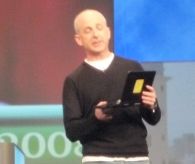 Microsoft is making a point of showing that Windows 7, the successor to Windows Vista will be light weight enough to run on older, slower, and less powerful machines than Vista. In other words, netbooks.

While introducing Windows 7 at the Professional Developers Conference today, Microsoft’s Steven Sinofsky held up a netbook (he didnt’ say what brand it was, but Engadget guesses it was an Asus Eee PC while Laptop Magazine says it looked like a Lenovo IdeaPad S10), saying it had just 1GB of RAM and it needed just half of that memory to boot.

There’s not much more to tell at the moment. All we know is that you can run Windows 7 on a netbook. But you know what? You can also run Windows Vista on a netbook. Sometimes it even runs quite well. The point is that Windows XP, which was originally designed to run on machines with as little as 256MB of RAM and sub-1GHz processors often tends to run better.

By the time Windows 7 is released in 2009 or 2010, odds are you’ll be able to pick up a $300 or $400 netbook that’s faster than anything available today and uses less power. So I’m sure it will be more than capable of running Windows 7. But unless Microsoft can make the case that Windows 7 offers useful features that are absent from Windows XP and doesn’t slow down systems, cause hardware compatibility problems, or other headaches, a lot of consumers will still be wary of the new operating system. Of course, in another year or two it will be harder to come by a Windows XP license than it is today, so the point may be moot.

On the other hand, there are plenty of Linux distributions that run perfectly well on netbooks today…

13 replies on “Sure Windows 7 will run on netbooks, but how well?”