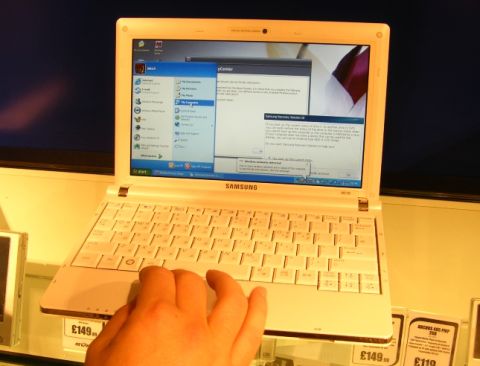 PC Pro’s Mike Jennings managed to get his hands on a Samsung NC10 netbook this week and he’s confirmed our suspicions: This thing rocks. On paper the Samsung NC10 is virtually indistinguishable from pretty much every other netbook released in the lsat few months. It has a 10.2 inch, 1024 x 600 pixel display, a 1.6GHz Intel Atom CPU, and 1GB of RAM. But its build quality tells a different story.

The Samsung NC10 sports a 93% sized keyboard. Granted, these percentages are kind of arbitrary, since there’s a bit of variation in “full sized” keyboards. But if even remotely true, that makes the NC10 keyboard one of the largest available on a 10 inch netbook, which should come as good news to anyone frustrated by the small, inconveniently placed keys on other netbooks including the Asus Eee PC 1000H and the MSI Wind.

Jennings says the touchpad is small, as expected, and takes a little getting used to. And a blue pre-production unit had two distinct buttons below the trackpad for right and left clicking, while the working white model had a single rocker button. I personally prefer a two button layout, but based on other pictures I’ve seen, it looks like Samsung has decided to stick with the single button trackpad.

You can read more about the Samsung NC10 in the Liliputing Product Database.