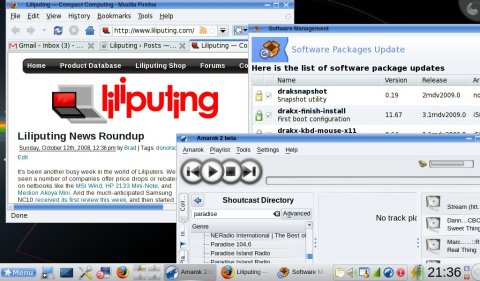 Mandriva 2009 was released a few days ago, and I just finished installing it on my Asus Eee PC 1000H. The latest version of this open source operating system comes with KDE 4.1, and up to date software including OpenOffice 3.0 (although for some reason it includes GIMP 2.4.7, even though GIMP 2.6.1 was released a week or two ago and OpenOffice.org 3.0 isn’t officially due out until today).

One of the other exciting changes in Mandriva 2009 is improved support for netbooks. Mandriva was one of the first Linux distributions to add out of the box support for the Eee PC 701 earlier this year. Mandriva 2009 supports additionaal Eee PC models as well as other netbooks. In the official product announcement, Mandriva claims that the new version will auto-detect low-resource systems or netbooks and install a GNOME desktop instead of the more resource-hungry KDE. But either I did something wrong or Mandriva 2009 doesn’t recognize the Eee PC 1000H as a low resource device. Either way, I wound up with a KDE desktop when running from the LiveCD and it stuck around after I installed the operating system.

Overall, I have to say I’m fairly impressed. This is my first experience with Mandriva, and while I’ve read that the install process in the past has been a bit tricky, Mandriva 2009 was a breeze to install. There are very few questions to answer and the whole installation took just a few minutes.

The most exciting moment in the installation process came at the end, when Mandriva presented me with options for adjusting the bootloader. While other operating systems like Ubuntu or Windows automatically assume that they should get the higher boot priority, Mandriva lets you customize the boot order as part of the installation process. So as soon as you reboot your computer after finishing the installation, your boot menu should be set just the way you like it. I have a triple boot system right now that runs Windows XP, Ubuntu Eee, and Mandriva. If I don’t press a button at the boot screen it will load Windows. But I can switch operating systems with a few clicks.

Mandriva seems to recognize most of my Eee PC 1000H’s hardware out of the box. I had no problem connecting to my wireless network. The microphone and speakers both  work. The 1024 x 600 display resolution isn’t a problem. Mandriva recognizes the multi-touch features on the trackpad. And some of the Fn keys work. Fn+F5 and F6 adjusts the screen brightness. But the volume keys don’t appear to work.

The system boots and shuts down pretty quickly. And the optional Compiz desktop effects are pretty. But there are a few things I need to either get used to, or figure out how to do properly. For instance, I installed Gnome-Do, a Quicksilver/Launchy clone for Linux that makes it easy to start applications with keyboard commands (no mouse or trackpad necessary). It installed just fine, but ironically I can’t seem to pull it up with a keyboard shortcut. On the other hand, hitting Alt+F2 brings up KRunner, which serves a similar function (and which you can use to call up Gnome-Do if you really want to).

Mandriva also recently announced Mandriva Mini, a custom distribution designed for netbooks. Like Linpus Linux Lite, Ubuntu Netbook Remix, and the version of Xandros Asus uses for Linux Eee PC models, Mandriva Mini has a custom program launcher with a series of tabs divided into categories like Internet, Games, and Office which make it as easy as possible to find the programs you’re looking for on a computer with a tiny screen. But it looks as though Mandriva is hoping to partner with OEMs to preload this software on netbooks. There’s no way I’m aware of to add the Mandriva Mini interface to Mandriva 2009, even if you’re running it on a netbook. At least not yet.