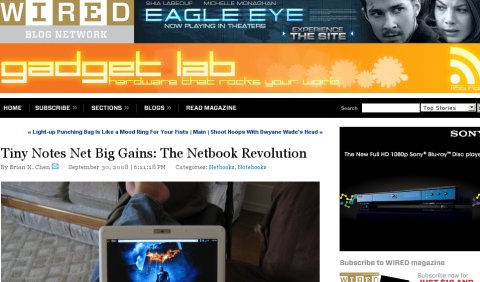 Yesterday a reporter from Wired contacted me for comment on an article he was working on about the rise of the netbook. My quotes didn’t appear in the article when it first went live yesterday, but he later edited me in.

The article provides a good overview of the current state of the netbook universe. These cheap, tiny laptops are incredibly popular, have practically taken over Amazon’s list of the best selling computers. Right now the things that make these laptops so popular are their small size and low price. But in the future, we could see new technologies making them even more exciting, thanks to better battery life and even instant on/off features.

It occurred to me that my response to reporter Brian Chen’s questions about the future of netbooks might make an interesting blog post. So I’ve decided to go ahead and post my email to Chen. You can find it after the break. Let me know what you think the future holds for netbooks in the comments.

10 replies on “Liliputing in Wired: The future of netbooks”