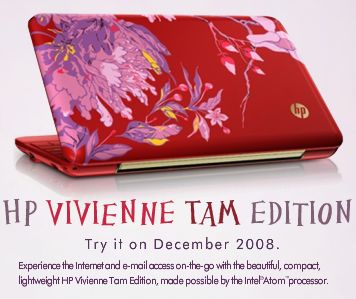 That Vivienne Tam designer edition HP Mini-Note that was spotted last month is apparently real. And it’s coming soon. HP plans to release this netbook in December. But that’s not the interesting part.

HP is working on a next generation Mini-Note computer. And while it’s not clear if this will be the first model in that line to hit the streets, it certainly doesn’t look like the current HP 2133 Mini-Note on the inside or out. Aside from the red color and floral patterns, this puppy sports an Intel Atom CPU.

I’d been assuming that HP would throw a VIA Nano processor in its next generation Mini-Note for three reasons. First, because HP already had a relationship with VIA. Second, because the VIA Nano is designed to provide an easy upgrade path from the VIA C7-M chip used in the current generation of HP Mini-Notes. And finally, because if VIA doesn’t have something lined up with HP, who exactly is the company expecting to use the next generation mobile chip?

No word on the screen size, storage capacity, or RAM for the Vivienne Tam edition Mini-Note. And no word on the price. But it appears that the netbook will run Windows Vista. I certainly hope it has either the same high quality 8.9 inch, 1280 x 768 display that you can find in today’s Mini-Notes or better yet, a 10.2 inch screen with the same resolution.

Keep in mind, it’s certainly possible that HP could offer a wide range of Mini-Notes in the future, with some models using the Intel Atom chip and others using the VIA Nano. But at the moment, things don’t look good for VIA.