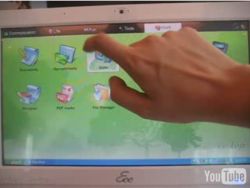 Asus held a launch event for several of its newest computers in Germany today. And Sascha Pallenberg from Eee PC News.de was there to check things out. He got some one on one time with an Eee PC S101, which I believe he fell deeply and madly in love with. And he also got to hang out with an Eee Top desktop computer, which is an all-in-one PC that sort of looks like an iMac. But unlike the iMac, it’s powered by an Intel Atom chip, runs Windows XP out of the box, and has a touchscreen. And it turns out it also has an Easy Mode interface much like the GUI Asus slaps on its Linux based laptops.

While the Eee Top isn’t exactly a netbook, it definitely bears a family resemblance to the Eee PC line of laptop computers. Like the netbooks from Asus, the Eee Top packs a lot of computer into a small space. And as you can see in the video after the break, it’s designed to be easy to use by people who aren’t used to computers, thanks to a unique program launcher application that makes it easy to find and start applications designed for communication, work, and other tasks.