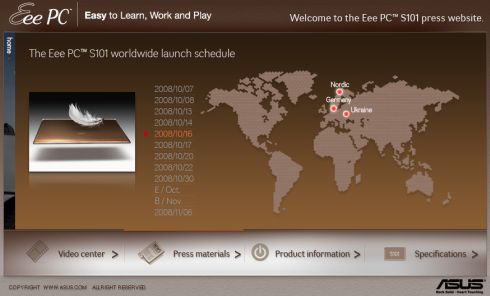 Asus has launched a press portal for the Eee PC S101 laptop. You know, the one aimed at “social elites.” The site featues video, specs for the netbook, and a bunch of pretty pictures.

It looks like there should be a Korean launch today, an event in Singapore tomorrow, and something in Spain next week. Noticably absent from the list? The US.

The Asus Eee PC S101 features a 10 inch, 1024 x 600 pixel screen, a 1.6GHz Intel Atom CPU, and 16GB, 32GB, or 64GB of solid state memory (I believe this is the first official confirmation I’ve seen that a 64GB model will be available). The netbook costs more than most other Eee PC models, with a starting price of around $699. But it’s also the thinnest and lightest Asus netbook to date, at just about 2.2 ponds and measuring just an inch thick.

Update: Looks like we have a US launch date: Oct 21st.

via UMPC Portal and Electric Vagabond