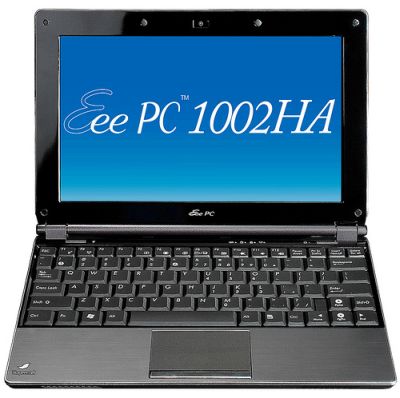 Now Blogeee has published a ton of photos of the upcoming device. And it looks pretty slick. It takes a number of design elements from the Eee PS S101 which gives it a slightly more polished, professional look than the Eee PC 1000H. It has a super-thin 2 cell, 4200mAh battery which helps keep the computer slim.

The 1002HA has all the connectors you would typically expect, including 3 USB ports, headphone and mic jacks, a VGA output, and Ethernet cable. But because the battery doesn’t cover the hinge in the back of the computer as it does on lower end models, Asus put several of those ports on the back of the unit.

The keyboard looks like standard Eee PC fare. The right shift key is tiny and shoved to the right of the up arrow/page up key. The status LEDs appear to be at the top of the keyboard instead of down by the brushed-metal wrist panel. And the power button looks like it should be much easier to press than the tiny power button on the Eee PC 901/1000 series.

Blogeee reportsthat the Eee PC 1002HA will be available soon for 449 Euros. Make sure to check out their article for a ton of photos.