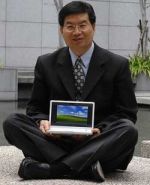 So I was skimming through Laptop Magazine’s interview with Asus CEO Jerry Shen, and a few things jumped out at me. First, as we already suspected, Asus will begin selling Eee PC laptops with touchscreens in 2009. But for some reason, Shen says that touchscreens will add thickness to the machine, which is news to me. Last time I checked, you could cram a touchscreen in an existing Eee PC like a 701 without building a thicker case.

Perhaps what Shen meant by that remark is that Asus will be working on thinner Eee PC models like the Eee PC S101 and that it would be difficult to fit touchscreens into those devices, so you won’t see an S101 with a touchscreen anytime soon. But that’s just a guess.

Other interesting tidbits from the interview: