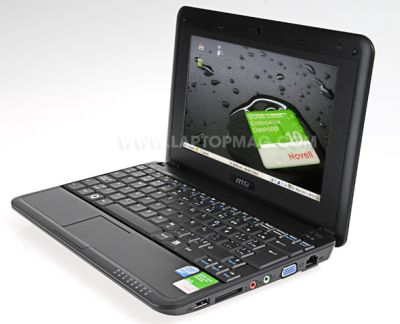 If you’re in the market for a netbook and looking for a bargain, you might be considering the MSI Wind U90. Like the popular Wind U100, the U90 has a large keyboard, an Intel Atom CPU, and an 80GB hard drive. It also has a smaller 8.9 inch display with a large bezel around the screen because it’s housed in the same chassis as the U100’s 10 inch display. And while the U100 has a 6-cell battery, the U90 has a 3 cell version.Finally, the netbook ships with SUSE Linux Enterprise Desktop instead of Windows XP.

But the U90 also costs much less than the U100. While the MSI Wind U90 is not sold in the US, you can pick one up from a Canadian retailer for about $370, including shipping. We’ve already seen a Canadian MSI Wind U90 unboxed and booted up. But what happens when you actually spend a little time with this netbook?

Laptop Magazine’s Joanna Stern has posted an in-depth review of the bargain basement version of the MSI Wind. The netbook’s smaller display is the same resolution as the larger screen on the U100, so she had no problems with the display. But she wasn’t particularly fond of the operating system.

First, SUSE doesn’t seem to have drivers for the 1.3MP webcam, making Skype video calls impossible. Second, connecting to a WiFi network was a nightmare, although the signal was quite strong once connected. And finally, Stern says she only got a feeble 1 hours and 39 minutes out of the battery, despite the fact that the MSI Wind U100 with a 6 cell battery gets more than 5 hours of battery life. I can only assume this is because SUSE lacks the power management features of some other operating systems.

In other words, if you’re not comfortable tweaking SUSE or replacing the operating system with Windows XP or another Linux distro, you might want to be careful about ordering the MSI WInd U90, especially now that the Wind U100 price is starting to come down. You can pick one up from Amazon for as little as $480

You can read more about the MSI Wind U90 and MSI Wind U100 in the Liliputing Product Database.

One reply on “A closer look at the MSI Wind U90”