Kristin Shoemaker is one half of the podcasting team Sudo Wrestling and she blogs at OStatic and Linux Librarian. She likes to take things apart and see if she can put them back together again in new and better ways. 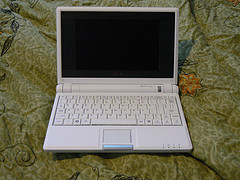 I am pretty well past the “geek” mark, and coming up really close to the “dork” point on the Nerd Spectrum. The first computer I ever laid eyes (or fingertips) on was some sort of Tandy species (yes, back in the day when Radio Shack made computers). My first computer in school was a Commodore PET. I was online before graphical browsers were available.

I came into the Linux world pretty late in the game. It was seven years ago this month (an incidental memory — they don’t give merit badges or cookies every Linux anniversary) that I installed my first Linux flavor on my desktop.

Here are my dirty tech secrets: I have never been able to “settle” on a distribution. There are a few I don’t like, but many I do. I adore gadgets, and the crinkly feel of anti-static packaging in my hands as I liberate a new piece of hardware, but I hate buying gadgets. And I will unabashedly admit I have never installed Linux on a laptop.

The last two secrets are why I have an EeePC 701 in front of me now, and why it will remain here (likely) far past the technology’s “Best Used By” date.

For several years I’ve wanted another laptop. I had one back in the 90s that weighed a good eight pounds, ran Windows 98 (or was at least brave in its attempt), and seemed to randomly format its own hard drive every six to eight months. Laptops are convenient, and portable, and really quite powerful. They’ve even gotten more durable. That experience colored me though — a laptop might be wonderful for traveling, and for school, but there are many inherent risks, if only because they are portable by nature.

So when visiting — anywhere — I needed to rely on the computers and internet connections of others.

That’s irritating, many times, for all involved. I really wanted a laptop. I didn’t want one that ran Windows (or Mac) though. Macs felt far too pricey and powerful for what I really wanted a laptop for — checking email, web browsing, and maybe simple document creation on occasion. Windows laptops could do this for a bit less change, but I began to find (brace yourselves) Windows was hard. Updates came at really inconvenient times, and didn’t necessarily care if I didn’t want to apply them or reboot the machine at that moment. Even if I did everything according to the book, it seemed Windows wanted to slide towards the chaos vortex.

But I would not install Linux on a laptop. People have tried, and people have succeeded (though some definitions of “success” depended on whether a missing hardware function would really matter in the laptop’s day to day use). I would have loved the challenge.

But I didn’t need a laptop that badly, and it was a lot of money for a challenge that had a high potential for yielding a whole lot of nothing.

I hung on, saying that maybe one day, if I could find a fairly inexpensive laptop that was built or configured specifically for Linux, I’d do it. Because sure, there were Linux-geared laptops available years ago. But no large scale manufacturing plants or testing facilities made purchasing a laptop with reasonably powered (and compatible!) hardware with a lovingly installed, configured, and torture tested Linux system way out of the price range.

I bought my Eee in February 2008. The only 4gb model I was not overly enthusiastic about was the white Surf. White Surfs didn’t have an easy-access memory upgrade hatch. No, I did not want a white Surf.

I can say with all honesty that I am still very much enamored of my white 4gb Surf. I haven’t been remotely tempted to upgrade the RAM. I don’t need to. And while, yes, certainly, there are things I wish ASUS had done very differently on the flagship Eee, I would not — I will not — give it up until the processor spews forth that last cycle.

Yes, I can say that even after seeing my husband’s 6-cell Wind in action. And I will be the first to swear up and down that the Wind design team at MSI have it all over the team who turned out the Macbook Air.

The reason why is simple. The screen size is small, and the keyboard is tiny (though being a woman with small hands, this has never been a real issue for me). I do wish the battery life went a little further. These are limitations I knew going in.

When the numbers are added up, my 701 works for me. The wireless has always connected to desired hot spots without fuss. The microphone and speakers aren’t theater-quality, but I can contact people with Skype on the road. I can create and edit documents and get online.

It’s basic computer use. My desktop can do all sorts of complicated tasks quickly. This doesn’t need to. I am happy, and I remain happy because it works for me, and I know all too well that even though my husband’s piano black Wind is pretty sweet, in six months, something sweeter will be there. What matters is that his chosen Wind –like my Eee — still do what they were designed to do beyond the six month mark, when all new tech starts to look decidedly less sexy.

The other thing — my Eee? It’s far too much fun to hack that cute little Easy Mode screen and make the machine do all sorts of things that the ASUS engineers never imagined.