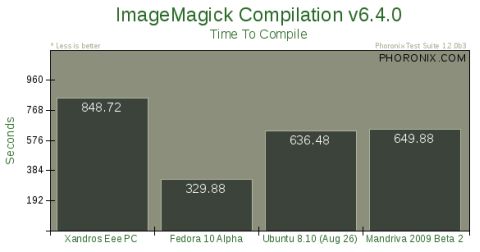 People are always asking which Linux distribution is best for this device or that. And the truth is, it depends. It depends on what it is you want to do. And it often depends on whether you favor performance or ease of use or any number of other factors.

With that in mind, Phoronix has published a rather awesome article showing how the Asus Eee PC 901 performs on a series of benchmarks while running four different Linux distributions. The distros include Ubuntu 8.10 Alpha 4, Fedora 10 Alpha, Mandriva 2009 beta 2 and the custom version of Xandros that comes with the Eee PC 901. In other words, these are all pretty much bleeding edge operating systems and I’m not sure I’d recommend anyone use them as a primary OS unless you’re actively looking for bugs. But each distro includes the latest kernel and system updates and, at least in theory, should be able to use the Eee PC 901’s hardware to the fullest.

So how did they do? Well, it depends. When it comes to encoding media files, Ubuntu was the clear winner. But Fedora was almost twice as fast at compiling an application. Xandros trailed behind the competition in most tests, but seemed to do well with tests that involved reading data from the solid state disk. If you’re trying to pick a new distro for you Eee PC, you should definitely check out the full article. I was surprised at just how far apart some scores were. The moral of this story is that when it comes to performance, the software matters at least as much as the hardware.

While these tests only look at the Eee PC 901, the Eee PC 1000 and 1000H have very similar hardware so I’d expect somewhat similar results. It’s important to note, however, that the 1000 has a different solid state disk than the 901, and the 1000H has a hard disk. So I wouldn’t expect the results to be identical.