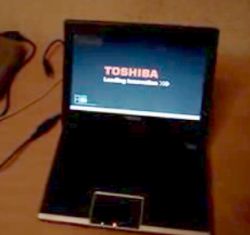 Just in case you had any doubt that Toshiba is getting ready to unleash its first netbook, a Romanian YouTube user has posted a short hands-on video that shows what appears to be the Toshiba Satellite NB105 that we first head about a few days ago.

The video shows a tiny Toshiba laptop that seems to look a lot like the press shots of the NB105. And it’s clear from the video that either this is either a netbook with a 9 inch screen or the person handling the computer has enormous hands.

Other than that, there’s not much to tell. The computer runs Windows XP and Toshiba seems to have preloaded some additional software as there’s clearly some sort of widget running upon startup. It’s also possible that the user installed some third party software. The boot time looks respectable if not particularly impressive. And the laptop’s certainly got the now-ubiquitous Intel Atom CPU.

Check out the full video after the break.